NDA Written Examination preparation in Delhi (National Defence Academy Written Exams Preparation in Delhi)
NDA (National Defence Academy) is an academy where Army, Navy & Airforce cadets are trained together for Indian Armed Forces before they go on to pre-commissioning training to their respective service academies. The foundation stone for the NDA was laid by then Prime Minister of India, Jawaharlal Nehru on 6 October 1949. The National Defence Academy was formally commissioned on 7 December 1954, with an inauguration ceremony held on 16 January 1955. Its campus is located in Khadakwasla near Pune, MaharashtraThe road to the challenging field of NDA is paved with the prickly stones of a competitive examination that is conducted by UPSC to scrutinize the most eligible candidate for different profiles offered by the three wings of NDA i.e. the Army, the Navy and the Air Force. The exams conducted are designed with the purpose to give the nation a blend of defence forces that are ready to adapt to any emergent situation easily and with great presence of mind. In order to achieve success in the career endeavors applied to the NDA Exams, perfect combination of time and effort is actually needed.At Tara Institute, NDA coaching in Delhi is offered with the precise focus done on imparting the conceptual framework molded with the true learning experience to the aspirants. Here, the candidate is trained to think and act in an effective and efficient manner while performing the duties at the respective field of operations.We offer best coaching classes for NDA and bridge the gap between their efforts and the success in their NDA exams. We guide our students and prepare them well to make correct decisions and attain the desired standard of living. Our classroom training program prepares the students with the balanced focus on improving their thinking and communication skills along with the theoretical brushing.Our features lie with:

We offer the crash course for NDA exam preparation through a focused classroom session mated with testing and doubt resolving sessions along with motivation and discussion sessions. We offer best coaching classes for NDA and prepare the students throughout their way to make the biggest move of their career. Our coaching classes help the applicants in gaining the verge over the highly competitive era.

Are you looking for NDA Coaching in Delhi? Join Tara Institute for best NDA result, let me tell you why there are many facts by which you can ensure that the Tara Institute is the best place for NDA coaching classes in Delhi.

Please find below few of them:

And many more facilities which make Tara best place for the really dedicated student.
So join today for best result in NDA Exam.

Due To The Impact Of Corona Virus in India, We Decided that We will not Provide classroom Studies or offline classes till Lockdown Period, Because Our Prime Minister Told That “JAAN BHI OR JAHAN BHI” And We Understand the Value of Education so we have Decided that we will Provide you LIVE Classes For NDA Exams Preparation, So join our Online Video Lectures for NDA Exams Preparation, Our All Faculties are Ready for Virtual Classes Or Recorded Video Lectures For NDA Exam.

For Details Call Us 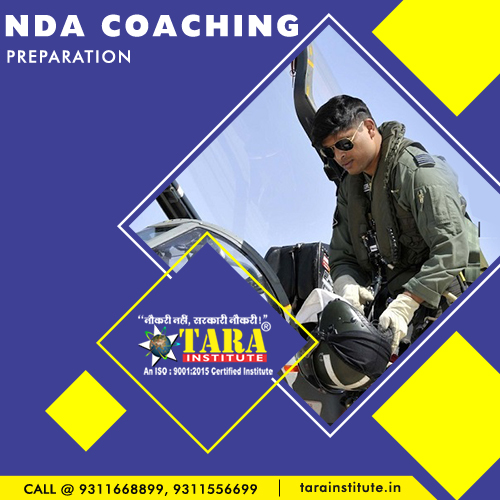 Indian Defence Services offer dignified, prestigious and lucrative career opportunities. As a part of the Indian defence services, one can serve in the Army, Air Force or Navy on combat duty, on administrative assignments, in the medical services, engineering services, in the JAG’s Department, or in the Education Corps. The nature of responsibilities varies with the diverse range of activities in the defence services. The recruitment to the Armed Forces is voluntary and every citizen of India, irrespective of his caste, class, religion and community is eligible for recruitment into the Armed Forces provided he meets the laid down physical, medical and educational criteria.

Indian Army is the land force of the military of India and it maintains the third largest war-force in the world. The Indian Army is a well-trained and well-equipped military service, with a troop strength of over a million. Along with defending the nation’s frontiers the army has also taken up the responsibility of providing internal security. The army has rich combat experience in diverse terrains, considering India’s diversity on this front, and also has a distinguished history of serving in United Nations peacekeeping operations. Indian Army consist number of Branches and services. The range of career opportunity is very wide.

Tara Institute® would be happy to Provide the best and highly experienced faculties in NDA Exams Preparation field. Our rich Experience and highly qualified Faculties gives Proper guidance to do a precise syllabus practice. Tara Institute® is  offering an exclusive batches to the students for NDA Written Exams Preparation at a minimum Fee as well as Free Classes of SSB on Every Sunday at Head Office only by retired Officers. Tara Institute® provide 200 MCQs tests of Monthly Current Affairs as divided in 4 tests including 50 questions each test on Latest Exams Pattern of NDA and Monthly Current Affairs E-Magazine in PDF forms which are totally free on our website and Android App which is also available free on Google play store. Current Affairs are very important for NDA written Exams. Since 2007 Tara Institute® has been working in the same Education industry of India, it would be great if you could call us for more details for NDAExams.

Tara Institute® are pleased to introduce ourselves to you as a old Brand of India for NDA Exams Preparation. Tara Institute® is a leading Brand specially for NDA Competitive examinations. We provide the best Section Wise Test Series for NDA Exams curated by ours Experts. The NDA Mock test series are based on the latest pattern and syllabus which give students hands-on experience for appearing in exams of NDA. We have more than 450 test series including Topic wise, weekly and previous years of NDA Examination. These tests increase accuracy and speed of the students to crack NDA Examination. Our Study Materials are up to date as per New pattern of NDA written exams.